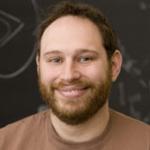 Professor David A. Spiegel, Ph.D., M.D., was born in New York City, and grew up in Teaneck, New Jersey. From a very young age, he was fascinated by the chemistry and biology of small molecules, and at 16 began doing research in a neuroanesthesiology laboratory at the University of Iowa. He went on to attend Harvard University where he conducted research under the guidance of Professor Yoshito Kishi. After graduating from Harvard, David began in Yale University’s M.D./Ph.D. program. There he conducted graduate research in Professor John Wood’s laboratory focusing on developing synthetic approaches toward the phomoidrides. During the course of these studies, he discovered that trialkylborane-water complexes could function as H-atom donors in free radical reactions. Following graduation from Yale, Professor Spiegel moved back to Harvard for postdoctoral studies under the guidance of Professor Stuart L. Schreiber. There he focused on developing an oligomer-based method for small-molecule synthesis to enable the rapid assembly of skeletally diverse small molecules starting from simple monomers.

David began as an Assistant Professor at Yale in June of 2007, was promoted to Associate Professor in 2011, and then to Full Professor (with tenure) in 2014. During his time as a faculty member at Yale, David has led the Spiegel Group’s research efforts in a number of successful directions, ranging from the development of antibody-recruiting molecules to fundamental studies of advanced glycation end-products.  He has also served as a consultant for International Flavors and Fragrances, Novartis Institute for Biomedical Research, Bristol-Myers Squibb, and Pharmaseq.  He has been recognized with various awards and honors, including the NIH Director’s New Innovator Award, the Department of Defense Era of Hope Scholar Award, the Ellison Medical Foundation New Scholar Award in Aging Research, the Novartis Early Career Award in Organic Chemistry, the Bill and Melinda Gates Foundation Grand Challenges Explorations Award, an Alfred P. Sloan Foundation Fellowship, and others.  He has been fortunate to be named recipient of the NIH New Innovator Award, the Ellison Medical Foundation New Scholar Award, the Camille and Henry Dreyfus New Faculty Award, and an Alfred P. Sloan Fellowship.

David is married to Kathryn Picanso, a lawyer in New Haven. They have a son, Leo Francis Spiegel, who was born in 2011.